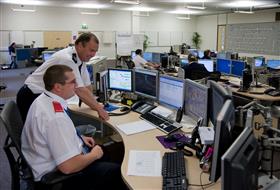 West Yorkshire, UK, July 26, 2018 - Police officers in West Yorkshire have been taken off their regular duties and drafted in to man phones because of an "unprecedented" number of 999 and 101 calls, The Yorkshire Post can reveal.

They are being used to provide "immediate support" to civilian staff while more workers are recruited, West Yorkshire Police said. The force has insisted it has carefully considered the impact of the temporary move on other areas of policing but said it was necessary to "ease pressures" in its Wakefield contact centre.

Calls to 999 alone are up by 15 per cent on last year, amid rising crime levels, and the demand is expected to remain high throughout the traditionally busy summer months.

Eleven police officers, who had formerly worked in the call centre, have been sent back there for at least eight weeks, head of customer contact Tom Donohoe confirmed.

Joining them are 18 police officers on restricted duties - those taken off front-line work often because of illness. Three of them will be answering 999 calls and the rest will be supporting the unit in other ways.

Mr Donohoe said: "They have been able to provide support on a temporary basis and will be released back to their day roles as new staff gain experience."

He said any officers who had not worked on the phones before would not be handling emergency calls.

He said: "There are no instances where someone without call handling experience would be allowed to answer a 999 or 101 call, we simply cannot take that risk, but some officers have been able to help us with on-line queries and web chat, for example, if they lack experience in call handling."

He said the force’s track record of answering 999 calls remained good, with an average wait of less than five seconds and no abandoned callers in the past year.

Nick Smart, police federation chairman for West Yorkshire, said they had been consulted on the move. He said: "Essentially, it is just down to unprecedented demand."

He said the 101 non-emergency number was particularly inundated and forces up and down the country were facing the same issue, adding that the long-term solution was more money for policing.

He said: "We have got demand increasing and resources that are being cut, so we need to reinvest in the police service."

Meanwhile, in North Yorkshire concerns have been raised over a police 101 call service after a councillor told a meeting how she drove to a supermarket and did her shopping while attempting to report ongoing antisocial behaviour.

She said: "If anyone thinks that is satisfactory they must be off their trolley."

Last September it emerged that of the 139,776 calls to the 101 service in the first six months of 2017, 21 per cent of callers hung up before their call was answered.

Commissioner Julia Mulligan is investing £3m over two years to improve the handling of calls to the force and this week, North Yorkshire Police opened an extension to its Control Room.

Mrs Mulligan said the public had "been clear that the service hasn’t been good enough to date" and the force had said the investment would help. She said the force would now have "no excuses" and had to deliver.