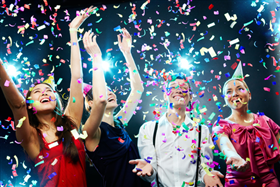 Brisbane, Australia, May 8, 2020 -- The Queensland Police Service’s (QPS) non-urgent contact point, Policelink, this month celebrates an operational milestone with Saturday, May 9, marking a decade since the contact centre was established.

The service, established in 2010, has become the primary contact point for Queenslanders enhancing the ability of the QPS to respond to non-urgent reports and policing advice in a professional and timely manner. Policelink is staffed 24 hours a day, seven days a week, 365 days a year.

The evolution of Policelink began in 2004 when then-Assistant Commissioner Kathy Rynders from the Metropolitan South Region formed a small project team to update the way policing was delivered across Queensland.

Today, officers and staff at Policelink celebrated one decade of service

In July 2007, $500 million was allocated to the project for all facilities, technologies and recurrent costs including wages. From here, Acting Superintendent Greg Flint and Inspector Michael Volk reformed the original project team and a lot of hard work began.

By the end of 2007, a site on Pineapple Street, Zillmere was chosen and construction of the current Policelink facility commenced.

On May 9, 2010, Policelink had its soft launch commencing operations at 6am. The first call was taken at 6.20am by Client Service Officer Neil Hickling.

In recent years, the introduction of the Policelink app has allowed Queenslanders to receive push notifications for the state and has app-specific functionality, including, but not limited to traffic crash reporting and eye-witness reporting with the ability to capture photographs and/or video through the app.

Police Commissioner Katarina Carroll said that she was incredibly proud of the service and impressed by the persistent growth of Policelink and its staff.

"Policelink has seen many improvements over the past decade to allow Queenslanders to contact us via their preferred channel – this includes online reporting, updates, registration and complaint / query lodgement," Commissioner Carroll said.

"The needs of the community we serve are constantly evolving and I am proud of my team for the changes they have made and continue to make to meet this," Superintendent Tucker said.

"The variety of what we manage now at Policelink has evolved into so much more than a contact centre – we deliver essential services to the community, police and whole of government.

"I am proud of what our staff do – they have saved Queenslanders’ lives, they keep people safe, give people comfort, care and reassurance."

"Whilst operationally, Policelink has constantly delivered excellent service, the real value of Policelink is the never-ending desire to lead change to improve and challenge the status quo of how policing should be delivered through technology and operational business reform," Inspector Volk said.

"We have come so far in the past decade that it is difficult to remember how things once were.

"I believe that Policelink will be one of the areas within the QPS that lead, create and drive further change over the next 10 years."

Superintendent Tucker said that he was excited about the future of Policelink.

"We have made lots of progress in flexible and alternative working conditions to better serve our rural and remote communities," Superintendent Tucker said.

"I am looking forward to reading reports in 2030 about the progress Policelink has made from 2020 and what the future will look like."

Commissioner Carroll said that Policelink allowed QPS resources to be re-invested into other priorities and proactive functions which would benefit all Queenslanders.

"When you contact Policelink online, by phone or via the app, you are helping reduce the number of calls to police stations and Triple Zero (000) contact centres," Commissioner Carroll said.

"I continue to encourage Queenslanders to think first, if a crime is not happening now, is not life threatening or there is no likelihood of the suspected offenders still being in the area, report via Policelink.

"A big thank you to all of the officers and staff members who have worked or are currently working for Policelink. You are an invaluable part of the QPS family."