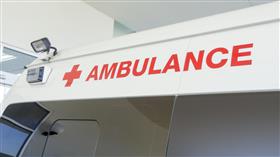 Thiruvananthapuram, India, Oct 3, 2021 -- While dealing with demands for mobile recharges to gas booking, the team operating the 108 ambulance service in Kerala is trying to tackle a big problem of how to keep the emergency line free from pranksters.

According to the data available with the firm operating 108 ambulance service in Kerala, in a year, out of 9.19 lakh calls received on the emergency line, as many as 5.40 lakh were prank calls.

Speaking to ANI, Saravanan Arunachalam, Kerala head of operations at the GVK Emergency Management and Research Institute, which operates the KANIV-108 ambulance service said that on a daily basis, around 3,500 calls are received in the emergency number, out of which only about 800 callers ask for an ambulance.

"There are similar problems in other states too but in Kerala the number of prank calls is higher. Out of a total of 9,19,424 that came to 108 in one year 5,40,571 were unwanted calls, including wrong number, miss call and prank calls," said the state head of 108 Ambulance services which operates in 18 states in India.

He said though there is a provision to block such numbers, the step was not taken because 108 being an emergency service.

"People who are calling for fun now may be in need of emergency service, but they might need an ambulance later. Every life is important and many times it's just a matter of minutes that life can be saved by admitting the patient on time. So considering it, we are not blocking calls. Awareness is required so that such unwanted calls are not made to an emergency medical service call centre like for an ambulance," he said.

Further detailing on the nature of the prank calls received on a daily basis, Arunachalam, said that of late after education had shifted to online mode, there is a rise of hoax calls from children.
"When we took the data, as many as 28,622 children called from their parent's mobile numbers. In such cases, these numbers are called back and the parents are informed of the seriousness of the incident," he said.

Out of the total wrong numbers, 93,858, were for booking gas and recharging mobile and dish TV, while 431 calls belonged to those who mistreated control room staff over the phone, mainly female employees during nighttime.

"The number of missed calls to 108 was 1,69,792. Many just keep quiet after calling. The 108 is a service used for emergency medical care, so when such calls come in, we call back and ask if ambulance service is needed. More often they dont need any medical care at all," said Arunachalam.