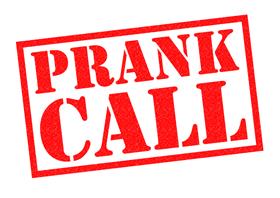 Guwahati, Assam, India, Jan 17, 2018 -- The officials at the 108 Mrityunjay emergency ambulance helpline have to wade their way through numerous prank calls every day while handling one of the most important emergency services in the city and the state.

Authorities said that at least 65 per cent of the total calls they receive in a day turn out to be "ineffective" which essentially means that they are either prank calls, hoax, abusive calls or silent calls. As a result, the telephone lines remain blocked for genuine callers.

Out of a total of more than 8000 calls received by the helpline per day in Assam, at least 5000 turn out to be fraudulent calls and only close to 3000 calls are genuine, said an official of the GVK Emergency Management and Research Institute (EMRI), which manages the ambulance service in the state.

Dhurjoti Prasad, communications officer at GVK EMRI, said that while some people call and ask for LPG cylinder bookings or for mobile recharge, a lot of men also call the helpline just to speak to the female executives.

"They usually remain silent if a male executive answers the phone and will call repeatedly until a female picks up and speaks to them," he informed. However, the helpline executives have been trained not to waste time on such calls and disconnect them after a few seconds to make way for important cases.

GVK EMRI officials said that at times callers even go to the extent of giving a wrong or fake address to the helpline executives. "Sometimes we assign the ambulance for a particular address but once it reaches the spot, they find that there is no emergency or patient at the place," said an official.