News : Special Helpline Gets 9,000 Calls from Students Appearing for Boards 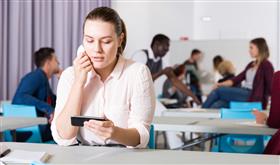 Chennai, India, March 26, 2019 -- The special helpline for students, 14417, has received as many as 9,814 calls from those appearing for board examinations since the beginning of March. Officials manning the helpline claimed that the number of calls is continuing to rise each day.

"We still have five more days to go and are expecting a significant increase in calls," said Francis Joseph, team head, 14417, education information system. Francis added that on average the centre has been receiving 200-220 calls and on March 2 alone, it received more than 1,200 calls from students. To keep up with the sudden spike in calls, counsellors had to put in extra hours beyond their shift time.

"Their queries are mainly stress related. They are anxious and have many last minute questions relating to their subject," said V Vijayalakshmi, a counsellor.

This time, the centre has also brought in teachers from government and corporation schools to help answer students' queries. The subject teachers visit based on the exam schedule. For instance, if the exam next day is Mathematics, they would have a maths teacher sit at the centre along with a counsellor and answer the students' queries.

U Ramajayam, a Tamil teacher from the Chennai Girls Higher Secondary School on MH Road, Perambur, had attended to calls from Class XII students on February 28, a day before the Tamil examination. "Students, especially those living in villages, were nervous due to the new pattern. I firmly asked them to not read any new topic and only improve on the ones they already know. I hope they did well," he said.

The five-seater call centre was set up last March. It is operated by officers who provide students with exam-related information and career guidance. Counsellors assist students who complain of stress. In the past one year, the centre received more than 1.42 lakh assistance calls from students across Tamil Nadu. However, the number of calls received in March this year is a lot less than the 26,000 calls received last year.

"But that was because the centre was inaugurated during the same time and so we had various query related calls. This time, it was primarily from students appearing for the boards," said Francis. "We are doing our best to help every child as much as possible. None of their queries will be ignored," he said.