News : Staff on Strike at Deutsche Bank Call Centre in for the Long Haul - Union 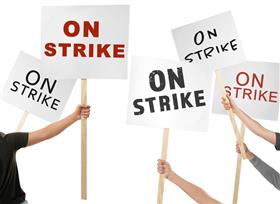 Frankfurt, Germany, Feb 2, 2021 -- Employees on strike at Deutsche Bank's DBKGn.DE call centre unit DB Direkt over pay are in it for the long haul, a union official said, signalling more disruption for consumers.

About 650 staff in Berlin and Essen have been on an open-ended strike since Saturday as they seek a 6% pay increase, in a significant escalation of a months-long labour dispute.

The employees are among the lowest-paid at the German bank, with starting wages of around 12 euros ($14.45) an hour, according to union officials.

"The employees are up for a fight," Roman Eberle, an official with labour union Verdi said.

He said customers trying to get through to the bank were facing up to 45 minutes or longer of waiting time.

"We are inflicting pain on the bank and are curious to see how sensitive the bank is to pain," he said.

The bank has so far countered DB Direkt workers' wage demands with offers of pay increases of 1.5% in two rounds.

Banks, including Deutsche Bank, have had to rely more on call centres during the coronavirus crisis and also after branch closures to trim costs.

The strike comes as Deutsche Bank is expected to award its higher-earning staff a 20% increase in bonuses for 2020, compared to 2019, a person with knowledge of the matter said last week, in line with an earlier Handelsblatt report.