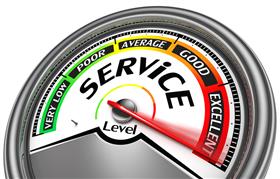 Kristen Cooper — Normal staffing at South Coastal Library is usually six but due to multiple circumstances only two were on duty March 1, which was the opening day of registration for the library’s March programs.

The phone rang non-stop during the day during which Ms. Cooper registered 99 patrons, remaining "calm, polite and courteous to every single caller, Ms. Jennings said.

Chad Maris — Mr. Maris arrived at the scene with a patient slumped over in the driver’s seat and he quickly noticed that the vehicle was still in drive and the patient’s foot was resting on the brake pedal, holding the vehicle in place.

"The patient awoke but was very disoriented. The patient’s foot slipped off the brake pedal and car began to move forward," Ms. Jennings said. "Chad could have allowed the vehicle roll away with the patient in it without injuring himself. However, Chad immediately dove into the car, forced the shifter into park and shut off the engine. Chad’s quick actions and situational awareness prevented what could have been a motor vehicle crash with others involved."

Anna West — Ms. West was dispatched to a scene where a boy found his mother in cardiac arrest. Unfortunately, Anna was the only one there who could tell the boy there was nothing else that could be done for his mother, Ms. Jennings said.

"Anna held the boy in her arms and had a moment of tears together," Ms. Jennings shared. "Hearing that the boy was hungry, Anna made sure that she got him what he said was his favorite food – a sub from Wawa. Anna deserves to be recognized for her utmost care, not only for the patient but for the patient’s family."

Employees may be nominated by co-workers, supervisors, customers or county residents. A committee comprised of supervisors and employees review all the submittals.

Recipients are publicly recognized at county council meetings during each quarter.