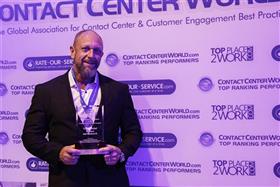 Jacques De Beer after received the award on behalf of Talksure for Best Large Sized Contact Center. "It is an honour and privilege to be recognised for such a prestigious award. Yet again we are extremely proud to represent South Africa on an international platform. We will uphold this honour by continuing to invest in our people and technologies, ensuring that we continue our drive for delivering unparalleled excellence within the industry," said Jacques de Beer, Managing Director of Talksure.

Talksure’s practice was vetted by the CCW judges in order to qualify for participation in the 2019 EMEA Conference. A detailed presentation on the contact centre’s best practices and innovations was showcased by Jacques to industry peers. The final judging process was carried out by the Regional Referees Committee and winners were announced at the Awards Gala evening.

Established in the UK in 1999, ContactCenterWorld.com is the World's largest Contact Centre Association with over 200,000 members in 200 countries and guides professional standards and practice for its member companies through training, education, best practice conferences and engagement measurement tools for customers and staff.

ContactCenterWorld.com will be hosting their international award finals in December in Barcelona. This event will see at least 25 nations worldwide participate for global honours. Talksure looks forward to the honour of representing South Africa at this event.

The ContactCenterWorld.com awards are regarded as the most prestigious global awards program in the industry - some even refer to them as being like the Olympics! Started in 2006 the awards are also fair, unbiased and valuable

Find out more about awards from ContactCenterWorld.com Awards at www.contactcenterworld.com/awards

Find out more about ContactCenterWorld.com events at www.contactcenterworld.com/conferences

Established in 2010, Talksure is a financial service provider. The strong entrepreneurial and ethical vision developed by our founder and chairman is shared by our Executive team who have almost 100 years of combined experience within the Financial Services and contact centre industry in the Europe and South Africa.

Today's Tip of the Day - Understand Your Business