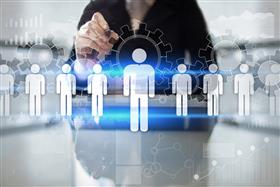 Pottsville, PA, USA, July 19 2017 -- TruBridge is relocating from the Schuylkill Mall to the former property occupied by Rubbermaid on Laurel Boulevard.

On Tuesday, workers from different companies were installing internet service and doing other needed work at the site. The goal is for TruBridge to begin operations at the 1410 Laurel Blvd. site in the first week of August.

"We have 200-plus hospitals that we do this across the nation for," Smith said.

She was quick to point out the business, which is headquartered in Mobile, Alabama, is not a collection agency. The employees can answer questions about billing or accounts and take payments. Both Lehigh Valley Hospital-Schuylkill locations use the services of TruBridge, Smith said.

She said other sites were explored in the county, but the Laurel Street site met all of their needs.

"I think this is a great space. We are excited about the new location," Smith said, adding the ample parking space was a big selling point.

Eventually, 80 people could work at the new location. Full- and part-time jobs are available.

Jim Miller Sr., owner of Miller Bros. Construction Inc., said a five-year lease, with a five-year option, was signed about six weeks ago for the space. Rubbermaid closed in 2015 to consolidate its operations to the Winchester, Virginia, facility.

The location has been known locally as the former United Metal Receptacle site. MBC Grings Hill, Schuylkill Haven, bought three parcels previously. MBC Grings Hill LP is the real estate division of Miller Bros. Construction. The property is about 175,000 square feet. About 100,000 square feet were torn down to make room for parking.

"The only people that come to look here need a lot of parking," Darrin Rapali, project manager for Miller Bros. Construction Inc., said.

The 38,000-square-feet back warehouse space is the only remaining available space, Miller said. The other two entities are American Lighting, which leases space for a project to change street lighting in a 90-minute radius of Pottsville; and Grid One, which is seeking to change electric meters within a 90-minute radius of Pottsville. Both were hired by PPL. Negotiations are ongoing for two other spaces — each 9,000 square feet— of office space. Miller and Rapali declined to say who the entities are. Both entities are located in Schuylkill County, they said.

"They are both relocating from the county," Miller said.

One of the companies expects to relocate by the end of the year, Miller and Rapali said.

"It’s a win/win for everybody," Rapali said of TruBridge moving to Pottsville, adding it creates revenue for the school district, city and county.