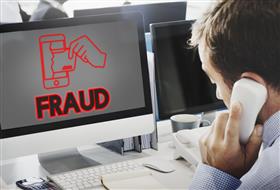 Abu Dhabi, UAE, Mar 14, 2022 -- Police in Abu Dhabi have returned Dh21 million to victims of financial fraud, including phone scams and other cyber crimes during the past seven months, authorities announced.

The money was retrieved through the new contact centre, which is tasked to deal with complaints of financial fraud at the police’s Criminal Security Sector.

During a press conference to launch the ‘Be careful’ campaign, Major Muhammad Al Rayan, head of fraud section at Abu Dhabi Police, said the force has received 1,740 reports or complaints of financial fraud through the new call centre from August 2021 until March 2022.

"There has been a significant increase in combating financial fraud since the launch of the new contact centre where police officers liaise with banks to track fraudsters," he said.

"We have managed to recover money in 80 to 90 per cent of the financial fraud cases that have been reported through the new call center."

This new call centre dedicated to liaising with banks and receiving financial fraud reports was set up in Abu Dhabi in August last year as authorities stepped up measures to combat financial crimes.

In the new awareness campaign, police urged residents to be vigilant with regards to their personal details, and to not give passwords or Emirates ID to unknown persons.

"People should not share their confidential information with anyone, whether their bank details and online banking passwords, ATM PINs, security number (CCV) or passwords or Emirates ID details," authorities warned.

Police added it will continue its campaign against financial fraud and cyber crimes as scammers were using different methods to con people out of their money.

People have been urged to report any suspicious messages or calls on 800 2626 or by emailing aman@adpolice.gov.ae or through the Abu Dhabi Police smartphone app.

Abu Dhabi Police is the primary law enforcement agency in the Emirate of Abu Dhabi, one of the United Arab Emirates.