News : UP Government Helpline to Curb Copying in Board Exams 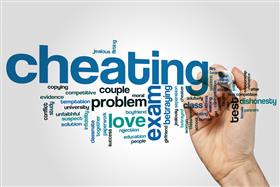 Lucknow, India, March 29, 2017 -- After going hammer and tongs against illegal slaughter houses and curbing VIP culture in the state, the new Uttar Pradesh government has trained its eyes on cheating in the board examinations.

Anguished over reports of mass cheating in the ongoing UP Board examinations, deputy chief minister Dinesh Sharma said adequate steps were being taken to eradicate the "nakal mafia" from the state and helplines and Whatsapp numbers have been issued for lodging complaints.

Sharma, who heads Secondary Education department, held a video conference with district magistrates recently and directed them to ensure that there should be no copying in the ongoing board examinations.

He even paid surprise visits to some exam centres in the state capital and neighbouring Barabanki.

In a bid to stop cheating, the board has issued helpline numbers and any person finding any information related to the cheating should WhatsApp on 9454457241 or contact on landline number 0522-2236760.

Asserting that a lot of changes are needed to be done in the field of education in Uttar Pradesh, Sharma said to curb cheating he had spoken with all the district magistrates and SSPs and directed them to impose prohibitory orders under Section 144 CrPC within 100 metres of the examination centre.

"I have also directed them to bring out the names of people who are a part of the ‘nakal mafia’, so that they can be interrogated, punished and sent to jail," he said. "I have also instructed the district inspector of schools to keep a tough vigil and debar the colleges where any such probability is felt and change their examination centres.Tough steps will be taken to eradicate this menace," he said.

The English examination for class 10 of the Uttar Pradesh Board was postponed at two centres in Mathura after an incident of mass cheating surfaced.

The Uttar Pradesh Class 12, Class 10 board exam 2017 that began on March 16 has registered large number of cheating cases in comparison to other boards in the country.

The UP Board was set up in the year 1921 in Allahabad by the Act of United Provinces Legislative Council. It conducted the first examination in 1923. The Board of High School and Intermediate Education Uttar Pradesh is the Uttar Pradesh state government administered autonomous.

The images of question paper were circulated on Whatsapp, hours before the examination while a few students went outside their examination hall and exchanged notes.

Photographs of several class 10 board students copying during mathematics paper from each other while some opening their books to find solutions went viral on social media and TV news channels.

Mass cheating has been reported from various districts like Mathura, Aligarh, Agra, Hathras, Kanpur, Deoria, Faizabad, Gonda and Barabanki, prompting the government to sit up.