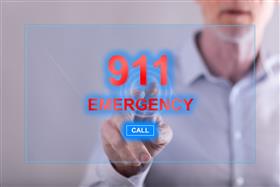 Gosnell, along with his deputies, helped coordinate the disaster response immediately after the storm. The 911 call center was buzzing: uprooted trees had knocked down wires and at least 50 power poles were damaged. Trees and wires blocked roads all night and for much of Friday. The village of Whitehall needed generators from the county to run its wastewater treatment plant. A barn off Kingsbury Road was destroyed and another heavily damaged at the Getty farm.

That was just Thursday night. On Friday, Gosnell needed to make sure there was an emergency shelter set up for those who couldn’t stay home without electricity. He needed to get the word out about free water and ice, provided by National Grid. Roads had to be closed because they were blocked by trees and downed wires.

By Saturday afternoon, he was working on storm assessments with National Grid. At 3 p.m. Saturday, he was at the Kingsbury Volunteer Hose Co. in Hudson Falls.

There just wasn’t a lot of time for sleep, for Gosnell or any of the first responders.

But while firefighters are highly visible, the administration behind the scenes often isn’t noticed. At a county committee meeting Monday, Hogan praised Gosnell for his work ethic and the long hours he spent getting the county back on its feet.

"He did an incredible job," Hogan said. "Boy, does he know his job."

Gosnell wasn’t eager to get any attention.

"We did our job," he said, unwilling to even put a number of hours he spent awake from Thursday through Saturday.

"We were up for awhile," he said, noting that his deputies were right there with him. "Everybody worked very hard and it was great teamwork."

Still, he said, the first responders deserve the credit.

"We just assist the fire departments," he said.