Industry Research : Half of the 16 Million Canadians Calling Government Call Centres Can't Get Through 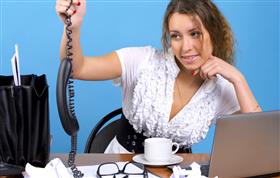 Half of the 16 million Canadians who tried to reach an actual agent when contacting a government call centre in 2017-18 could not get through, says a report released Tuesday by the Office of the Auditor General of Canada.

The report found millions of callers to three call centres — Employment Insurance, Canada Pension Plan and Old Age Security, and Immigration, Refugees and Citizenship Canada — could not reach an agent during the 2017-18 analysis period.

Callers were either redirected to an automated system or website, or told to call back later, the report said. Some simply hung up.

The auditor general found that 6.9 million callers weren't able to talk to a live person and over 1.3 million terminated their calls early.

Callers who did get through to a person had to wait 30 minutes or longer, exceeding some call centre wait times.

Veterans Affairs call centres were also scrutinized, and the auditor found callers typically were able to reach an agent.

But the auditor still slammed the department for its wait times and for cancelling teletypewriter services for the hearing impaired "without first consulting with or telling veterans."

Many of the government's call centres did not have customer service-focused delivery models, the auditor general found.

"We found that Veterans Affairs Canada and Immigration, Refugees and Citizenship Canada did not always consider the needs of their clients when making decisions about call centre services," the report stated.

Immigration, Refugees and Citizenship Canada didn't have wait time targets; the report found that department had the longest average wait times of the call centres it examined.

"Without service standards, callers could not know what level of service they could expect from call centres, and the departments had no public commitments to meet," the report said.

Where standards existed, many weren't based on feedback from callers, the auditor found.

The report also found plans to modernize federal call centres are behind schedule.

Five years after the federal government began modernizing over 221 centres, only eight have been completed.

The report found Shared Services Canada hadn't even finalized its plan for the remaining 213 call centres ahead of the 2020 deadline.

The report warns that upgrading the remaining call centres could take years, and centres could be plagued by "service interruptions or outages because of their aging systems."

Call centre problems a relic of the Harper era?

At a news conference Tuesday afternoon, Minister of Families, Children and Social Development Jean-Yves Duclos acknowledged the government still has much work to do.

But Duclos slammed the previous government under Stephen Harper, accusing the Conservatives of neglecting the call centre system.

"Our government has done away with the negligence of the past government and will continue to improve services to all Canadians," Duclos said.

Michelle Rempel, an Alberta Conservative MP, rejected the government's attempts to attribute the problems to the Harper era.

Rempel said the Liberals should be taking responsibility for the problems with call centres and other issues the auditor general highlighted in the report.

"I cannot believe that six weeks left in Parliament after four years (in government) and they are coming out here and saying it is Stephen Harper's fault," Rempel said. "That's just patently ridiculous."

In a joint statement, Duclos and other ministers acknowledged the problems identified by the auditor general and said the government is taking steps:

- Immigration, Refugees and Citizenship will hire more call centre agents, expand their hours of operation, offer a call-back option and install a chat bot on social media channels to respond to questions.

- Veterans Affairs will restore the teletypewriter service for hearing-impaired clients.

Overall, the federal departments under scrutiny agreed with the recommendations in the auditor general's report.

The only department that isn't fully complying with the auditor's recommendations is Employment and Social Development Canada, which handles calls about Employment Insurance, the Canada Pension Plan and Old Age Security.

The department told auditors it will not track those who hang up before the 10 minute standard waiting time has passed.

Jean Goulet, a member of the AG's audit team, said all hang-ups should be counted.

"On that specific point we have a different view," Goulet said during a news conference. "Our view is based on industry standards."