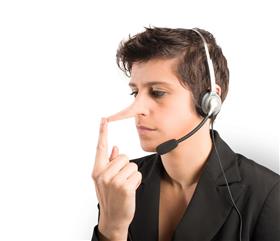 A quarter of us don’t complain about poor service, over half give excuses to get company representatives off the phone, and nearly two-thirds say businesses get it wrong about how good their service is.

This "traditional British reserve" is undermining efforts to improve customer service – with many companies only learning about customers’ issues when they leave.

How many of us have told a waiter we were happy with an overcooked meal or said our broadband or banking services were fine just to get a company representative off the phone? Now a new survey has quantified what might be described as "traditional British reserve", and in doing so, revealed a huge dilemma for British businesses.

The survey of 1,000 consumers, carried out for Contact Centre Software provider MaxContact, found that nearly a quarter of UK consumers have told a brand they were happy with the service they received when they weren’t. At the same time, a whopping 61% believe that UK businesses think their service is better than it is.

The survey is evidence of a major challenge for businesses. Many consumers are unhappy with the service they receive, but a large number won’t complain to the brands concerned. In which case, companies only learn about a customer’s dissatisfaction when they lose their business. To make matters worse, well over half (55%) of all consumers make excuses to get off the phone with a company representative, giving businesses precious few opportunities to identify and rectify any issues a customer may have. Industries like energy, banking and telecoms are regulated to make consumer switching easy, making them especially vulnerable to the consequences of consumer reticence.

Perhaps counter-intuitively, the survey found that younger consumers were more reticent about complaining than older counterparts, with Generation Z 31% more likely to cover up their dissatisfaction than Baby Boomers.

MaxContact CEO Ben Booth said: "These are troubling findings for UK business because it means they aren’t being given the chance to solve a customer’s issue before they walk away, or to improve customer service more generally.

"Without customers telling us what we’re doing wrong, it’s difficult to know what we need to do better, but customers are reluctant to say. That might be because they don’t like confrontation, they don’t want to cause a scene, or they don’t want to have a drawn out conversation when they’re busy – I think we’ve all been there. But whatever the reason, that British reserve is hampering the attempts of many businesses to be better."

"It’s not the UK consumer’s job to tell you what your business is doing wrong, but if you’ve built a rapport and you’re asking for feedback in a way that requires minimal effort, your customers might be more willing to come forward," he says.

RealWire is an online press release distribution service with over 20 years of experience.